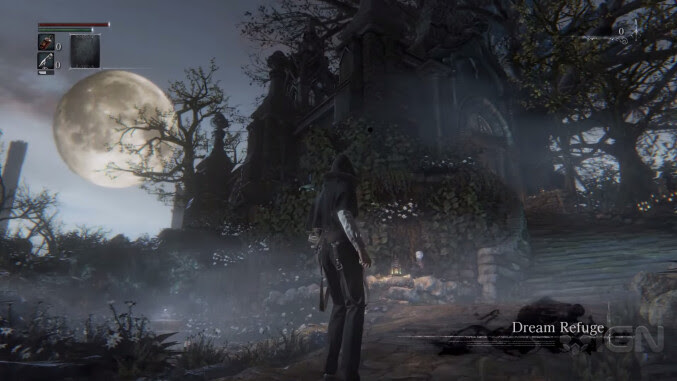 Dream imagery in Bloodborne is about as prevalent as blood imagery, making it a major theme. But what is the significance of all of this? First, let’s look at the current references.

Next we have the Dream Refuge, also referred to as the hunter’s dream. I would like to clarify that “hunter’s dream”, as it is written on the menu when the first lamp is lit is not capitalized, signifying that it is not a name for the place, which we know to be the Dream Refuge, but a description of the place. Update: This has been effectively disproved by the Masaaki Yamagiwa Developer walkthrough video that was posted, in which the tranlation text refers to it as the "Hunter's Dream".

Next, we have a quote from Iosefka just before giving the PC the “Yharnam blood” transfusion:


Oh, don’t you worry. Whatever happens, you may think it all a mere bad dream.

The last reference is not to dreams, but sleeping. In the description of the Protector Ritual Masters, it says:


Whether in a graveyard or in the bedroom, there will always be humans that are sleeping. Among the the hunters survives the knowledge of individuals who pray for those resting, a unique ritualist.

I would like to highlight the fact that humans in a graveyard are referred to as sleeping. Resting or sleeping is sometimes used as a euphemism for death, but given how prevalent dream imagery is it is worth noting.

So, what is there to take from all of this? I don’t think there are any real conclusions to draw, so instead I will just follow a line of reasoning and see what questions are generated from that.

To start, is the Dream Refuge part of the Nightmare World?

Based upon the presence of messengers, and the fact that it is reached by the lamppost portal, I would tentatively say that it is. In this context, could the Dream Refuge be a place of good inside a world of bad dreams? Even if it is, it might not be able withstand the terrors that await…

What is the nature of the Nightmare World/Dream Refuge?

I don’t there is enough evidence to create any real theories. I do think, however, that the Nightmare World does have something to do with dreams/dreaming versus being a creative term to describe an unpleasant place. There isn’t any strong evidence to support this, it just seems more likely because of the prevalence of dream imagery

Is this all a dream?

No. Once again, there is no evidence to suggest this, and I’m sure it will be a recurring theme throughout the game, but everything being a dream is lazy storytelling. Miyazaki thrives on uncertainty, so I think it is more likely that parts of the story will be questionable in their validity and reality, but not the events of the game wholesale. The idea that we might have an unreliable narrator in our PC is very interesting though, and it will be interesting to see how that unfolds.

How do the Ritual Masters fit into the Hunters/Nightmare World?

The biggest connections they have are that they pray for those resting (people who might be dreaming) and the fact that it is the Hunters who have knowledge of these individuals. Otherwise, I don’t believe that they have a huge part to play with the Hunters and the Nightmare World, but there isn’t much evidence either way.

There are plenty of references to dreams and nightmares already, and while how it all comes together is unknown, I am willing to make these informed guesses:
Email ThisBlogThis!Share to TwitterShare to FacebookShare to Pinterest