Quick Lore - An Easy to Read, bullet pointed, explanation of the universe of Bloodborne, and the Player-Character’s narrative

The following content was originally created in this thread in /r/bloodborne. All credit for the content of this post goes to BlackhawkRogueNinjaX, with only minor changes being made to reflect the difference in format.

This posts summarizes into bullet points their summary of the lore and story of Bloodborne, distilled from their previously written posts. You can find links to their original posts in the section headings. 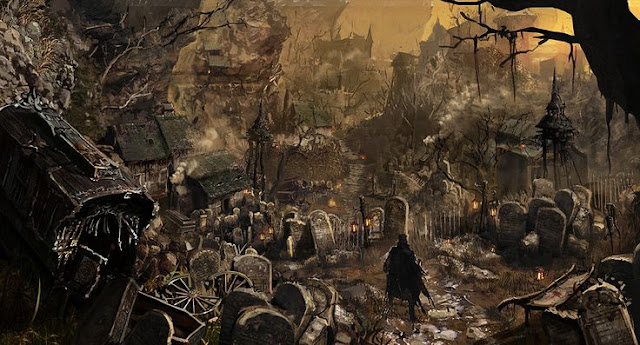 Over the 15,000+ word/4 part series, I covered a lot of detail and ended up with one ‘simple ‘end to end ‘plot’ explanation. But I appreciate that not a lot of people have time to read an extensive essay on Lore.

So I thought I’d bullet point the key details in a summary post for those who are interested but don’t have a lot of time.... 15K down to 1K is about as good as it gets!!!

All points listed below are supported by in game evidence.

Hopefully the Game will make more sense to folks now....

•The player character comes to Yharnam because they is sick
•The sickness the player character suffers from is a blood sickness called hypochromic Anemia
•Hypochromic Anemia is paleness of blood; “Paleblood”, which can be treated with Blood transfusions
•The Starting Classes are all indicative of ‘Lifestyles’ that can lead to or cause Hypochromic Anemia
•In game “Paleblood” is a metaphor for ‘a sickness that is cured by absorbing/imbibing blood’
•Moon Presence is sometimes referred to as “Paleblood” as she is also seeking to ‘cure’ itself by absorbing blood (this has synergy with the player character ‘healing with Blood’ & ‘leveling up with blood’), and she is also the active agent provoking the ‘blood sickness’ in Yharnam.
•The opening cinematic shows our hunter, due to our strong will, resisting the descent into beasthood, making us a special candidate for the MP. The messengers (slaves of the Moon Presence) arrive & tie us to the Hunter's Dream - We become the surrogate child of the MP.
•The Contract we sign at the start is with the healing church only; in exchange for the 'Yharnam Blood' we will hunt beasts to "cleanse these foul streets".

•Bloodborne shares a lot in common with the narrative of Dark souls with its themes of Light/Dark, Life/Death, and Un-death, or reviving of the dead as a perversion of the natural order.
•Blood carries Echoes which are a person’s ‘life force’ & ’Will’ (may as well call them Souls)
•All ‘life/souls’ & ‘Power’ in the Abyssal Cosmos comes From Oedon
•Oedon is a traditional representation of the Abrahamic, Monotheistic God- formless, all powerful, creator of all life.
•When a person or entity dies its Echoes/Souls naturally pass onto the next plane
•Planes are stacked in Bloodborne (like the world of Dark Souls). You can go to a higher/nicer plane, or to a lower/worse plane
•The ‘Highest’ plane would be echoes returning to the Abyssal cosmos which is like life returning back to Oedon. From there Oedon can create more life - this is the natural order.
•Because Blood carries ‘Echoes/Souls’, life can arise from Blood in this universe (“We are born of the blood” - see cold blood flowers, Tomb-mold, & Vermin as examples)
•Life-force/Souls are represented by light in these games (the thread of light) which is why beasts explode in a shower of blood & light.
•Vermin is the life that arise from blood that has stagnated i.e. Blood where the Echoes/Souls have been unnaturally retained as opposed to moving on to the next life, instead ‘Corrupt’ life is created out of the stagnating/Old Blood
•Stagnating/Corrupt Blood can be Poisonous (Slow & Rapid) which steals ‘life’ from others
•This is why Cainhurst nobles are referred to as ‘VileBloods’ by the healing church, they are perverting the ‘natural order’ by using the Old blood to make themselves immortal and drain the life-force of others (traditional vampires), making them Undead
•Gaining the ‘strength of un-death’ (power) from the Old Blood / the blood of others causes the wills of men to fail, turning them into beasts. Beasts wildly attack people to consume their strength/life force.
•The Beasts are undead, this is why enemies re-spawn when you rest at lanterns, why coffins need to be chained shut, and why hunters progressed to using Saw Weapons to cut up the corpses to prevent re-animation
•“Runes” (meaning to Speak & to Cut) are representations of ways in which you can gain strength/ascend - They represent a character's Desires
•They only take effect when you prove your will/desire to change is strong enough; by cutting the symbol into yourself, and enduring the pain, the effect is carried by your blood echoes, changing your nature.
•The ‘faded’ to ‘bright’ representation of the different strength rune variations shows how much a person desires the change/ascension.


•[Added by the Lore Hunter] Link above to BlackhawkRogueNinjaX's post deciphering the Caryll Runes.

•Oedon is partly inspired by Norse ‘Supreme God’ Odin, Who crows & Ravens are messengers of.
•This is why Eileen the Crow is a hunter of hunters (the ferment-surrogates of the moon presence) and only believes in Sky Burial
•Sky Burial releases the echoes/souls from a person back to the abyssal cosmos, to give them back to Oedon, she targets the Hunters as they are stealing the echoes/souls from others to make them & the moon presence stronger
•The moon presence revives you upon death so you can go out and bring echoes back to the dream
•The creepy hug the moon presence gives you in endings 2 & 3 is it absorbing the strength & blood echoes from you to make herself strong
•The moon presence is designed to look like a Leech that has grown & grown, becoming more and more powerful, to one day be ‘complete’; link to image of Leechs/similarities with the MP Dreadlocks
•The Moon Presence and Wet Nurse are at Odds; the MP’s lanterns lead hunters to destroy Mergo’s Wet Nurse.
•Mergo’s Wet Nurse is designed to look like a cross between a giant Crow, the Angel of Death, & Vishnu; all represent ‘Death & Judgement, and restoring the natural order’. She is essentially a Arch-Angel of Oedon.
•MWN is killing hunters and feeding their echoes to baby Mergo (the child of Oedon) to return the echoes/souls back to the Abyssal Cosmos
•This Conflict between ‘the Leech’ & ‘the Crow’ is foreshadowed early in the game when Eileen fights Henryk over the “tomb of Oedon”
•Eileen represents MWN
•Henryk represents MP
•Henryk has “unnatural long life”
•Drops Heir Rune, which “uses Dark methods to acquire Echoes”
•The Hunter's choice of endings;
•Selfishly duck out of the conflict, live peacefully in the next ‘higher’ plane
•Foolishly sustain the dream and replace Gehrman as ‘key surrogate’ to the MP
•Or Ascend and stop the MP, ending the hunt.


Ok, so that's it as a ‘complete explanation’ -

I hope it makes the story of the player character more digestible. If you have any questions about the above, i’m more than happy to clarify things.

Thanks for reading. See you all in the Dark Souls 3 for more meaty lore hunting ;)

Just to say, finally, thanks to everyone on this sub for being awesome this year, and to Aegon of Astora, as his ‘Let's Talk’ Lore series was my favourite this time around.

And also, to say thanks to u/Mates_Brotel for his encouragement.
Email ThisBlogThis!Share to TwitterShare to FacebookShare to Pinterest