The following was originally written here. All credit for the content of this post goes to Ar-Sakalthor, with only minor changes being made to reflect the difference in format.

This article discusses the chronological usage and understanding of blood by Cainhurst, the Healing Church, and Byrgenwerth. 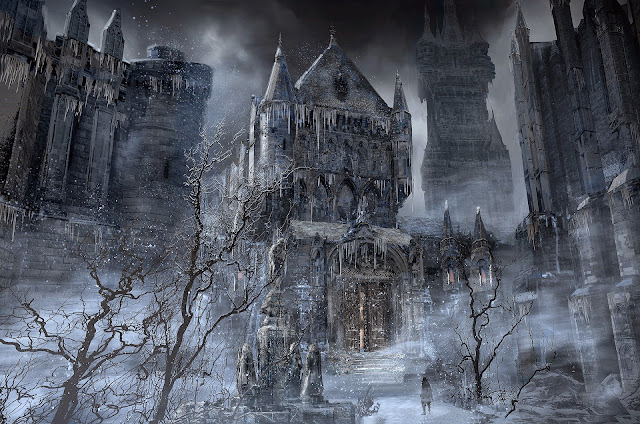 Alright, we're all familiar with Byrgenwerth's discovery of the Old Blood in the Pthumerian labyrinths, and how this basically led to the founding of the Healing Church. We're also quite knowledgeable on the Cainhurst Vilebloods, their immortal queen and their questionable methods.

But while beating Lady Maria for the third time and afterwards going for the Rakuyo in the Fishing Hamlet (already have it from previous NG but shit's worth money) I had a revelation while looking at its description :

"Hunter weapon wielded by Lady Maria of the Astral Clocktower. A trick sword originated in the same country as the Cainhurst Chikage, only this sword feeds not off blood, but instead demands great dexterity. Lady Maria was fond of this aspect of the Rakuyo, as she frowned upon blood blades, despite being a distant relative of the queen. One day, she abandoned her beloved Rakuyo, casting it into a dark well, when she could stomach it no longer"

From this weapon description and from the physical outlook of Maria, it is clear that she was a noblewoman of Cainhurst, related to Queen Annalise herself (also thanks to the description of her hunter garb :

"Maria is distantly related to the undead queen, but had great admiration for Gehrman, unaware of his curious mania"

But the part that interests me most here is the third part of the Rakuyo's description :

"Lady Maria was fond of this aspect of the Rakuyo, as she frowned upon blood blades, despite being a distant relative of the queen."

This tells us two interesting things.

1. As Vilebloods and Cainhurst nobility in general are particularly fond of blood weapons (Evelyn, Reiterpallash, Chikage), the Rakuyo may very well have been a custom-built weapon, a unique model designed exclusively for her.

2. A much, much more important thing. Not only is the Queen suggested to already be related to blood artifacts, but it is clearly stated that by the time of Maria's ownership of the Rakuyo blood weapons were already very widespread in Cainhurst arsenals.

Annalise is described as the Immortal Queen, but I think that her immortality spans over more than the 100-years-ish period that covers the lore of Bloodborne (post-Byrgenwerth's discovery that is). She has knowledge of many ancient secrets, as is made clear by her dialogue when we try and propose her with the Ring of Betrothal, an item that is described to have had a special meaning imbued in it by the Great Ones themselves back in the "age of the Great Ones", that of a blood contract (her response to the proposal is

"Speak not, those words. We have little need of a consort. Such a path would belike lead to further ruin. Thou'rt dear to Us. We would see no harm befall thee..."

So there seems to be some hidden consequences to such a betrothal that she alone knows of.

In addition, she longs for a Child of Blood. Now that is the only character in the entire game that has any knowledge of such a thing, and only through her are WE aware of it. Except for one character that is Queen Yharnam of Pthumeru, who herself bore a Child of Blood: impregnated long ago by Oedon the Great One of Blood, she gave birth to Mergo the hybrid Great One in her time, before disappearing from all records. That Queen Annalise knows of this ancient development when even the upper echelons of the Healing Church, Mensis and the Choir are unaware of it (we're not even sure that they KNOW that Yharnam is named after a Pthumerian Queen) is clearly pointing that her wisdom is much deeper, and much more ancient.

But of great importance is also her response to us if we consent to kneel to her at her first encounter, but when asked to pledge our allegiance to the Vileblood we chose to instead rise up. While seemingly annoyed, she declares:

"Arrant fool. Vileblood or no, forget not; We are thy Queen. Bend the knee."

Instead of just declaring "We are Queen", she says "We are thy Queen". That is extremely important to me, for it implies that the Queen's influence once reached far wider than her Vileblood court and the Cainhurst nobility. I even suspect her to have ruled the lands of Yharnam at some point.

I was reminded of all that when looking at the description of the Rakuyo, and then I think that what unlocked it all unlocked to me was Alfred's (and the Church Executioners in general) similarity in attitude with the agents of the Spanish Inquisition : he tracks the Vilebloods not by any personal reasoning, but by "faith", because the upper echelons of the Healing Church probably designated the Vilebloods to him as their mortal enemies. To him Vilebloods are to be hunted and their Queen slain so that his mentor Logarius may at last be granted martyrdom. And during the time of the Spanish inquisition, indeed the Catholic Church designated Jewish and protestant people as privileged targets of the Inquisition partly because they were opposed to their faith, but most of all because they were political adversaries, Protestants in particular. They split from Catholicisim and started to gain support among the people, something the Vatican could obviously not approve.

That made it all connect in my mind : Cainhurst is indeed the sworn enemy of the Healing Church not because of philosophical or theological divergences revolving around purity of blood, but because of political strife for power. I believe that Vilebloods were an established force, with Knights of Cainhurst using blood-weapons, long before the Healing Church was established in Yharnam. In my opinion, they used to rule the country of Yharnam even before Byrgenwerth came across the Old Blood in the hintertombs of Pthumeru. To me this is the obvious explanation of the Cainhurst "out of time" atmosphere : a stone castle with a Late Middle-Ages feeling, tapestries and paintings, weapons like the Reiterpallasch recalling the Renaissance, but most of all their attires: a full plate medieval knight armour, a medieval-looking crown and a Renaissance noble-style outfit. It was not just some illusory pride or misguided feeling of nobility. They partook in a much more ancient custom, that of sharing empowering blood among nobles, and the whole culture of Cainhurst comes down from the time when that custom emerged.

Maria, who is suggested to be one of the original Byrgenwerth scholars, and to have partaken in the massacre of the Fishing Hamlet with her Rakuyo for the college long before the Healing Church schism occured, used a weapon that is specifically described to be a unique design in an era where blood-weapons were a common occurence in Cainhurst.

If my reasoning is correct, then I think that Byrgenwerth may indeed have found the holy medium in Pthumeru, but that some other form of Old Blood was already used by Cainhurst nobles - although probably in secret, they would have excellent reasons to hide from the common people the source of their strength.

Look at the paleness of skin of the Vilebloods : Annalise's and Maria's (although she might not be considered a Vileblood per se, she's nobility). Sickly pale indeed they are. Few living people of note bear such paleness in the game, and these are Djura, and the Pthumerians of the Chalice Dungeons. Now Djura can be excluded from this I believe, as he is clearly not a Vileblood and has no relations whatsoever with Cainhurst. However the Pthumerians are interesting ; Much like Maria, Queen Yharnam used and manipulated blood on a level that can almost be described as magic. And not unlike Maria, the Pthumerians able to incorporate fire in their strikes. And finally, while the Great Ones left them long ago, the Pthumerians survived, most of them as keepers of the labyrinths.

After Byrgenwerth's schism the Healing Church would be born, started its researches, and slowly but surely grew in power and in influence in Old Yharnam, to a point where it even threatened to oppose Cainhurst as the dominant political entity. I do not have any idea of who gave the first stroke, but at some point the two powers became mortal enemies, Cainhurst simply viewing them as another power challenging their domination over Old Yharnam, and the Healing Church seeing their influence as a hindrance on the progression of their research on the Old Blood. And thus the Church ended up wiping out the entire castle, but not before they had acquired enough power among the people to be able to justify this action. It would only be then that the Healing Church would have complete autonomy and freedom of action - which would explain how they took control of Yharnam as a whole. It is even possible that, although she only had distant ties with the Queen, Maria's presence among the Hunters dissuaded the Healing Church from taking actions before hand, and that they did not dare to make a move against Cainhurst until Maria's suicide, which would make the Executioners one of the oldest branches of the Church, as the Cainhurst Massacre would then take place even before the founding of the Oto Workshop. This would explain however, why the shrine to Logarius would be found so close to Old Yharnam, as the events of Cainhurst predate even the burning.

"Once, a scholar betrayed his fellows at Byrgenwerth...and brought forbidden blood back with him to Cainhurst Castle. It was there that the first of the inhuman Vilebloods was born."

However there are two things that make me doubt that this statement can be used against me. First the choice of words: it was there that the first of the inhuman Vilebloods was born. Not it was then, but it was there. This game has alot of dialogue and item description that do need to be taken literaly in order for them to understand the truth behind them, and in this case it would mean that the first Vileblood does not need to be born at the time of that betrayer. It only states that the first Vileblood was born in Cainhurst Castle. Second is Alfred himself, and the order of the Executioners. As I've stated beforehand there are lots of resemblance between them and the Inquisition, and I wouldn't be surprised if that story of a renegade scholar was forged up by the Healing Church to justify their holy crusade against "blood traitors". History is, after all, written by the victors, and I'm sure that the Church would rather had their followers and agents believe in thieves and mockeries of the Church's good work, rather than in an ancient power that the Church had to wipe out in order to take complete control of Yharnam.
Email ThisBlogThis!Share to TwitterShare to FacebookShare to Pinterest